The Ferrari 458 Italia is a mid-engined sports car produced by the Italian sports car manufacturer Ferrari.

That commitment has also produced the 458 Italia GT of which there are several versions – GT2, GT3 and Grand-Am – honed to suit the technical rules of the many championships in which it competes.In keeping with Ferrari tradition the body was designed by Pininfarina under the leadership of Donato Coco, the Ferrari design director. The interior design of the Ferrari 458 Italia was designed by Bertrand Rapatel (Director of Ferrari Interior Design), a French automobile designer.

The car's exterior styling and features were designed for aerodynamic efficiency, producing a down force of 140 kg (309 lb) at 200 kilometers per hour (120 mph). In particular, the front grille features deformable wiglets that lower at high speeds, in order to offer reduced drag. The car's interior was designed using input from former Ferrari Formula 1 driver Michael Schumacher; in a layout common to racing cars, the new steering wheel incorporates many controls normally located on the dashboard or on stalks, such as turning signals or high beams.

In line with a tradition begun by Enzo Ferrari himself, Ferrari’s commitment to the track has always extended well beyond the world of Formula F1 and also embraces GT racing which has even stronger links to its road car production. 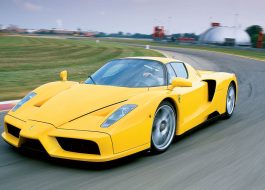